The brochure offered tourists a variety of chauffeured automobile trips along the rim, excursions to Navaho and Hopi Indian Reservations and mule-back or horseback trail rides into the Canyon. It also spurred me to see if I could identify the lookout point where mother and daughter stopped to view the Canyon’s splendor and pose for the photo. I have never been to the Grand Canyon so am not familiar with specific vistas, but the brochure mentioned two scenic landmarks situated within a couple miles of the El Tovar hotel. Could one of them be the spot? I searched Google Images.

The first one—Grandeur Point—I rejected immediately. Upon searching the second one, I found modern-day photos where the shape of the rock and its cracks are nearly identical, the tree on the left looks the same, and so does the landscape in the background. Here were colorfully clad tourists standing in almost the exact spot as the Cheshires, more than 100 years later: Yavapai Point. 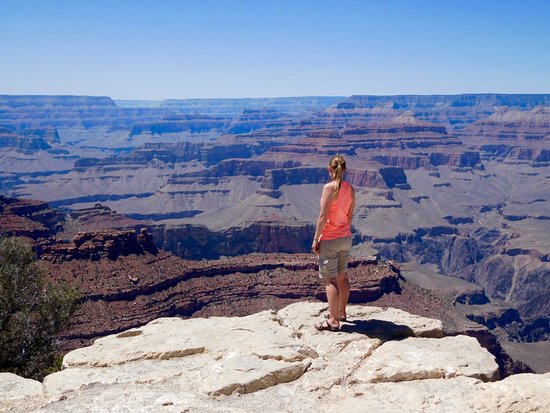 (This photo of Yavapai Point is courtesy of TripAdvisor)

To reach this scenic overlook, Ursula and Clara could have walked along a footpath for about one and a half miles east of the El Tovar hotel. However, judging from their clean, high-heeled shoes, they likely drove (if they had their own car) or paid $1 each to join the auto tour that left from the hotel at 2 pm daily. Imagine their awe upon approaching the Grand Canyon. What they beheld at the rim would have been unlike anything they had ever seen. Remember, this was an era before ubiquitous glossy travel magazines and the Travel Channel. “The sensation is novel—absolutely unique,” suggested their tour brochure. “Not every visitor can at once adjust untrained eyes to this sudden shift from the usual outlook…it is like seeing a landscape from a low-flying aeroplane.”

Perhaps their experience was similar to that suggested poetically in a 1926 Los Angeles Times article, “Natural Monuments of Arizona Lure Tourist,” which the Cheshires may even have read back home in LA:

“You see the wonderful combination and blending of color in the towering cliffs and the distant haze that floods the canyon and overspreads the mesas beyond, and marvel at the skill of the Master Artist that has produced so vast a canvas and maintained such a harmonious and inspiring tone…You saunter along its rim, linger about Inspiration and Yavapai points, motor over to Grand View and watch the changing lights and shadows at morning and again at evening; stand with uncovered head as the moon tries to send its shafts of lights into those shadowy depths and the Grand Canyon and all this big out-of-door world will leave a new meaning to you.” If you have seen the Grand Canyon in person, what was it like for you?